Cause Of The Depression 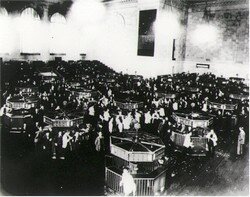 Economists still debate the cause of the Great Depression of 1929. Myriad factors led to the financial collapse, but historians do not agree on exactly how events and governmental policies combined to spark the stock market crash, declines in consumer demands and deflation that plunged the western world into economic crisis.

To some extent, the cause of the depression was due to weaknesses in the U. S. economy that had been masked by the boom years of the 1920s. The “Roaring 20s” were marked by cultural shifts and perceived economic prosperity in the United States. That’s because the United States experienced significant economic growth following World War I. The expansion was due in large part to the federal government’s growth policies, a significant rise in construction projects, the expansion of the consumer goods sector and unchecked speculation on Wall Street.

However, when challenged by various economic troubles both at home and abroad, it became clear the American economy was not as strong as had been believed, and the gap between rich and poor was actually quite wide. During the 1920s, it’s estimated that the combined annual earnings of the nation’s middle class – roughly 42 percent of population – equaled those of the top 0.1 percent of earners.

People thought times were good in the U.S., but much of Europe was still reeling from the negative effects of World War I and fell into a period of economic decline in the 1920s. To help European countries, the American federal government provided loans to Germany whose economy was floundering because of reparations it was required to pay for the destruction caused during the war. The U.S. had also loaned 17 countries $10 billion during the war, and repayment terms became an issue as the allies wanted the debt forgiven. With much of Europe’s economy in shambles, American exports to these nations also declined, which was another of the causes of the depression.

Before the Great Depression, there were limited regulations that governed the stock market. Investors were able to speculate wildly and buy stocks on margin or using borrowed money. This rampant speculation led to erroneously high stock prices. So, when the stock market began to falter in the months before the October 29 crash, the speculative investors could not make their margin calls. This prompted a massive sell-off sparked by investor fear with some $16 billion lost during the month of October 1929 alone. The poor policies that governed the stock market proved to be another of the causes of the Great Depression.

Another reason the new depression started was due to the government’s own policies regarding taxes on income and imports. For example, the tax rate on America’s wealthiest individuals was reduced to 25 percent in 1927. Additionally, the Smoot-Hawley Tariff Act of 1930 raised import taxes on some 20,000 foreign goods. The taxes were the some of the highest ever levied by the U.S government, and foreign nations began to take retaliatory measures. The amount of U.S. imports and exports was cut in half.

Effects of the Depression

In America, economic crisis prompted several policies that would sustain much of the poverty stricken county until the start of World War II which prove to be what ended the Great Depression. President Roosevelt’s New Deal created social programs that provided work for the unemployed and safeguards for the banking and investment systems. The tax rate on the nation’s wealthiest was increased to 79 percent in 1936. The Federal Deposit Insurance Corporation was created to insure people’s bank deposits against future bank failures. Additionally, buying stocks on margin was eliminated, preventing investors from partaking in rampant speculation.