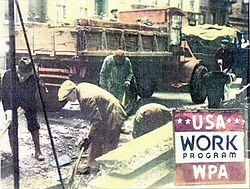 When Franklin Delano Roosevelt was elected president in 1932, he inherited a nation in the pits of an economic crisis that cost millions their livelihoods and life savings. During his campaign, he pledged to create a great new deal for the American people. Upon his election, Roosevelt – often called by his initials "FDR" – worked hastily to initiate reforms to alleviate the economic catastrophe.

Herbert Hoover served as president prior to FDR and thought the government should not support the people; rather the people should support the government. Hoover believed local governments and private charities should provide relief efforts for the downtrodden. Faced with unprecedented social problems, Roosevelt elected to help the American people get past these challenges by offering relief programs and helping "the forgotten man at the bottom of the economic pyramid." He took office on March 4, 1933.

The president worked with scholars and theorists to develop strategies to lessen the effects of the economic crisis. Congress quickly passed FDR's proposals and reforms in an effort to end the depression as quickly as possible. Once he took office, FDR's first official act was to declare a four-day bank holiday. During the holiday, Congress created the Emergency Banking Bill of 1933, which sought to steady the banking system and build public support for the industry, with the backing of the federal government. Later in 1933, Roosevelt signed the Glass-Steagall Act which created the FDIC or Federal Deposit Insurance Corporation. The legislation still works to insure all deposits made at the nation's banks.

Among FDR facts is the amount of legislation written and passed during his first-term as president. During the first 100 days of FDR's presidency, a multitude of other bills were passed by Congressional leaders. The intent of the legislation was to alleviate poverty, reduce unemployment and accelerate economic recovery by providing work relief programs and financial regulations.

Many successful relief endeavors were launched as part of FDR's new deal. Some are still in existence today.

The Securities Exchange Act of 1934 created the Securities and Exchange Commission. The SEC was intended to repair the confidence of investors and provide reliable information and clear rules for the exchange of securities.

The Civil Conservation Corps addressed rampant unemployment by hiring 3 million single men aged 17 to 23 to work in the nation's forests. The men lived in the forest and planted trees, dug ditches and built reservoirs. Workers were paid $30 a month, and men sent two-thirds of their paycheck home to their families.

Created in 1935, the Works Progress Administration employed more than 8.5 million people and transformed the nation's infrastructure, building bridges, roads, buildings, parks and airports. The program spent $11 billion between 1935 and 1943.

The National Industrial Recovery Act and the National Recovery Administration were regulated the number of hours employees could work in a week and banned child labor. These measures were taken to reduce unemployment.

The Home Owners' Loan Corporation worked to save Americans' homes from foreclosure.

In a response to the Dust Bowl catastrophe, the federal government began paying subsidies to farmers who left land fallow or planted crops that replenished nitrogen to the soil. The measure was passed as the Soil Conservation Act in 1936.

The Fair Labor Standards Act gave protection to 13 million people and called for a 40 hour work week and 40 cent minimum wage for workers.

These programs did not end the depression, but they did serve to make the American people's plight easier during the 1930s. What's more, many of the dams, roads and buildings constructed by the federally hired labor during the depression years still exist today.