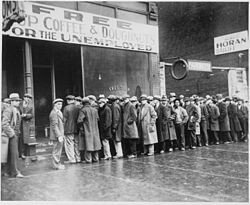 Learning about the economy just before and during the Great Depression can help you understand how the country spiraled into economic turmoil so quickly. Consider that during World War I the federal government spent three times more than it collected in taxes. In 1920, the government cut back spending in an effort to balance the budget, prompting a severe recession.

However, with the country’s manufacturing machine ramped up due to the war efforts, the economy bounced back and thrived for roughly the next 10 years. The automobile and convenience appliances like refrigerators and washing machines were taking hold in American life, so production of consumer goods was high. Returning soldiers made for a readily available workforce to produce these goods, and wartime munitions and military equipment factories were transitioned to make peacetime goods. Since the public perceived that the economy was good, many bought many big ticket items on credit.

Because the public perceived that times were booming, an economic downturn that began in the summer of 1929 was thought to be part of a cyclical economic boom-bust sequence. That turned out not to be the case, as a devastating economic depression was taking hold. Output levels didn’t recover as anticipated and manufacturing production fell steadily for the next three-and-a-half years. Adding to the problem was the overproduction of agriculture. The overseas market for food had declined following World War I which caused crop prices to drop, strapping farmers with rising debt. Many lost their farms or equipment to bank foreclosures and repossessions.

Problems on the Stock Exchange

Another thing that causes economic crisis is the practices of the stock exchange. In this case, this can be attributed to practices on the New York Stock Exchange. During the 1920s, stock investors had speculated wildly and bought stocks using only a 10 percent down payment rather than paying the full price. The stocks were then sold for a profit. This “speculation” caused artificially inflated stock prices. During the summer of 1929, investors could not make their margin calls, which prompted a massive sell-off of stocks.

Then, on October 29, 1929, the stock market crashed. On this one day, dubbed “Black Tuesday,” the Dow Jones Industrial Average fell almost 23 percent, and the market lost between $8 billion and $9 billion in value. The entire month of October was marked by astonishing losses in the volatile stock market brought about the rampant purchase of stocks using borrowed money. In October, approximately $16 billion was lost in the stock market.

After Black Tuesday, millions of Americans began to withdraw their money from banks. Thousands of banks failed as money was withdrawn. By 1933, more than 11,000 of the nation’s 25,000 banks had become insolvent. There was no money to lend, and the lack of available credit further worsened the economic crisis. With all these factors in play, people stopped spending money and demand for products and services ground to a halt. Lessened demand for consumer products led to lessened demand for workers. Millions of workers lost their jobs or saw their wages cut, the economy further deteriorated.

The economy of the Great Depression can be characterized by three key economic indicators. In the 1930s, industrial production in the United States declined 47 percent and the gross domestic product fell by 30 percent. The wholesale price index – or rate of deflation – declined 33 percent.

To compare the economy of the Great Depression to the economy of today, you should look at the second worse United States economic crisis which occurred in 1981-82. During that United States economic crisis, the country’s gross domestic product declined just 2 percent and the unemployment rate reached its highest level at just under 10 percent. During the 1981-82 depression of economy, prices continued to rise, rather than fall as they did in the Great Depression.