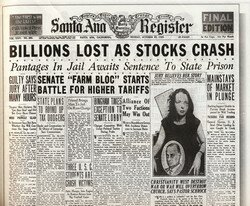 When Herbert Hoover was elected president in 1928, he predicted poverty would be eliminated in the United States.

Coming at the end of a decade where millionaires were made overnight, his forecast may have seemed logical at the time. The stock market was making many Americans very wealthy.

Between 1925 and 1929, the value of the stock market increased from $27 billion to $87 billion. That increase more than tripled the value of portfolios for the average stockholder. In fact, a wealthy financier, John J. Raskob, wrote in a magazine article that Americans should invest $15 a month in the stock market. Doing so would generate $80,000 over a 20 year period, Raskob wrote.

The rapid expansion can be attributed to the chancy convention of buying stocks on margin. Buying on margin is where an investor borrows money to buy a greater amount of stock. In some cases, investors could borrow up to 75 percent of the purchase price. Stockbrokers and banks financed the speculators. Borrower often paid 20 percent interest on loan because they were certain the risk would pay off. Lenders were also so confident in the market that speculation transactions became routine. However, the Federal Reserve Board frowned on the practice, issuing warning against it.

In the end, the Federal Reserve’s fears were right. The market crash of 1929 caused investors to lose $16 billion in the month of October alone. On October 24, 1929, investors began selling stocks when they couldn’t make the margin calls. The biggest single day loss came on Black Tuesday – October 29, 1929. Between $8 and $9 billion was lost during the great crash. By November 17, more than $30 billion was gone.

How Does the Stock Market Work?

If investors believe the value of a stock will fall, they must sell it a lower price. But, if all investors sell their shares simultaneously and no stocks are bought, the market value shrinks. This is precisely what caused the stock market to crash in 1929.

Help From the Rich

To offset the number of stocks being sold, wealthy investors tried to stop the great crash of 1929 by buying up large amounts of stock. When the stocks began to be sold in great numbers on the afternoon of October 24, 1929, weather financiers pooled their resources to try and stop the fall.

Their efforts were not successful and by October 29, 16 million shares had been sold for smaller and smaller values as the day progressed. Some stocks couldn’t be given away at any price. The stock market crisis intensified quickly and panic had ensued by the day’s end. By the end of 1929, the value of the stock market had decreased by half. Many of the nation’s investing class lost everything in the great stock market crash. Suicides were commonplace.