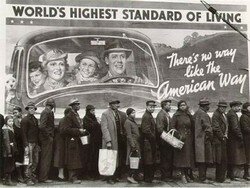 Everyone in the United States was affected in some way by the turbulent events between 1929 and 1941. Old and young alike were impacted as millions of people became unemployed and forced to seek out a better life in unfamiliar areas of the country.

Many societal problems increased as a result of unemployment and the loss of money. Among effects of the Great Depression was an increased crime rate. The unemployed turned to petty theft to feed their families. The rate of suicides increased as well as the amount of malnutrition among children. Desperate women turned to prostitution to earn money. Healthcare ceased to be a priority and doctors were only called when the situation was at its most dire. Prohibition was overturned in 1933, so Americans had ready access to legal liquor. Alcoholism increased as many sought comfort in the bottle.

College was out of the question for most Americans. Throughout the history of the depression, the enrollment at the nation’s universities shrank. A positive effect of the depression was high school attendance. Many young men stayed in school longer since there were no jobs available. However, spending on public education plummeted, forcing many schools to close or operate with staff shortages.

Marriage trends also changed significantly during the depression. Wanting to wait until they could provide for a family, many couples delayed getting married. While the divorce rate dropped during the decade, many husbands abandoned their wives. The “poor man’s divorce” saw men simply abandoning their wives and families. The birth rate dropped off sharply, as Americans became educated about birth control. Adding more children to their dire straits was simply not an option for many.

Throughout the history of the Great Depression, many people migrated to areas of the country following the promise of jobs. Many left rural New England and upstate New York. With the Dust Bowl decimating the Great Plains, thousands fled to California for the promise of work on large agricultural farms. A good portion of the migrants were adolescents and teens who left their families to seek out opportunities to earn wages. With younger children still at home who needed to eat, these teens “rode the rails” across the country seeking jobs.

Despite the hardships for many, Hollywood continued to produce films and Americans flocked to movie theaters. Event with the cost of an evening on the town, two of every five people saw at least one move a week. Films like “Gone with the Wind,” “The Wizard of Oz” and “The Three Stooges” made debuts during the depression years. Radio programming flourished through the depression as many families owned a radio before times got tough. President Roosevelt relied heavily on the radio to communicate with the American public during his popular “Fireside Chats.” Appropriately, the musical genre of the blues also came to prominence during the depression.