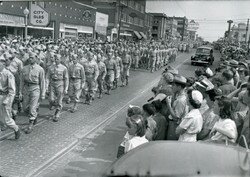 Historians cannot pinpoint one date that served as the end of the Great Depression. One thing is for certain though. The depression ended during World War II. Facts about the war on the home front, including wartime production and government spending, show how this occurred.

The United States moved to prepare its military machine even before it officially declared war on Japan on December 7, 1941. That’s because many countries in the world were already making aggressive actions towards independent nations. In 1937, the Japanese invaded China. In 1939, Adolf Hitler’s German Army invaded Poland. These two events put President Roosevelt on alert. Reelected in 1936, Roosevelt worked to revitalize America’s military infrastructure which had fallen by the wayside after the conclusion of World War I.

To achieve a high level of military “preparedness,” the country had to essentially create entirely new industries. For example, military leaders of the time knew airplanes would serve a significant role in the coming war, but the United States military had only a few planes and no real way to construct or buy more. The country had to literally create a new market for planes and other military armaments and equipment from scratch. And that meant injecting billions of federal dollars into the economy.

Among facts about World War Two is the government’s creation of the Defense Plant Corporation. The DPC was created in 1940 and overseen by a committee of business leaders from varied economic sectors. Among members was William Knudsen who helped systematize Ford Motor Company’s production line. Knudsen also served as president of General Motors. Other members included Donald Nelson, a Sears Roebuck Company vice president and Ralph Budd, president of the Chicago, Burlington and Quincy Railroad.

What resulted from the DPC’s efforts was a military machine that not only prepared and equipped the country for war. But that helped pull the economy out of the Great Depression doldrums. The DPC provided loans to private sector companies, allowing them to ramp up production. For instance, magnesium was needed to construct aircraft hulls, so the DPC loaned money to Alcoa which gave the company the ability to increase production of the heavy metal to 600 million pounds per year.

Military infrastructure was also needed, and the construction of installations around the country provided jobs for the unemployed. In 1939, the U.S. military had 28 airfields. During the war years, 1,000 more were constructed across the nation.

One of the things about World War 2 that scholars have noted is the amount of government-financed capital spending that occurred prior to and during the war. Prior to 1940, the government accounted for only 5 percent of the annual investment in industrial capital. By 1943, the amount had grown to 67 percent.

The nation’s unemployment rate was also impacted by World War Two. As young men volunteered or were drafted into military service, the numbers of jobless Americans declined significantly. With the need for military equipment steady and men overseas fighting, many women went to work in factories. One of the fun facts about World War 2 is the emergence of “Rosie the Riveter,” a cultural symbol of the American women who went to work during the war to create munitions and other supplies.

With the nation still reeling from the Great Depression, the government had to find ways to pay for the war effort. In 1940, the nation’s first general income tax was levied. The government began withholding income taxes from basically all American’s paychecks. The number of Americans who had to pay income taxes increased from 4 million in 1939 to 45 million in 1945. The new tax brought in some $45 billion for the federal government in 1945. Even so, it was far less than the $83 billion spent on the war in that year.

To help finance the entire cost of the war, the Treasury Department sold “war bonds”. Americans bought the bonds as investments as they returned a 2.9 percent annual interest rate at maturity, which was usually 10 years. While the war bonds didn’t make anyone rich. They served as a valuable way for Americans to contribute financially to the war effort. In 1946, 85 million had purchases more than $185 billion in war bonds.