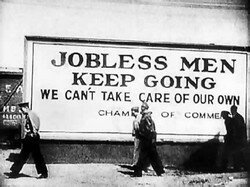 Here are some interesting facts about the Great Depression.

* Some 6,000 street vendors walked the streets of New York City in 1930 trying to sell apples for 5 cents each.

* President Herbert Hoover's name became synonymous with the hardships faced by many. Soup was called "Hoover Stew," and shantytowns made of cardboard and sheets were called "Hoovervilles."

* Thousands of homeless families camped out on the Great Lawn at Central Park in New York City, which was an empty reservoir during the Great Depression.

* The term "skid row" came about during the depression years.

* One of the largest Hoovervilles in the nation was built in 1930 in St. Louis. It had its own mayor, churches and social institutions. The shantytown was funded by private donors and existed until 1936.

* John Steinbeck wrote "The Grapes of Wrath" and "Of Mice and Men" about the lives of these people and the devastating effects of the Dust Bowl.

* In the 1920s, the wealthiest one percent owned more than a third of American assets.

* When stock speculator was a prominent practice, banks lent money to investors to buy stock. Nearly $4.00 out of every $10.00 borrowed from the banks was used to buy stock

* During the 1930s, manufacturing employees earned about $17 per week. Doctors earned $61 per week.

* The stock market didn't return to pre-depression levels until 1954.

Information about Roosevelt and the New Deal

* Roosevelt blamed "unscrupulous money lenders" and a "generation of self-seekers" for the Great Depression.

* Forty-three "alphabet agencies" were created during the New Deal.

* The Empire State building, the Chrysler building, the Golden Gate Bridge and Rockefeller Center were all built as part of depression-era worker relief programs.

* Six of eight major New Deal initiatives were found to be unconstitutional by the U.S. Supreme Court.

* Three towns were created from scratch during the New Deal. Greendale, Wisconsin, Greenhills, Ohio and Greenbelt, Maryland were created during work relief programs. All the towns still exist today.