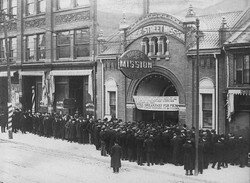 The Great Depression was a decade-long, unprecedented financial crisis that affected countries in North America, Western Europe and other industrialized areas of the world.
A catastrophic collapse of the stock prices on the New York Stock Exchange in October 1929 is considered to be the impetus for the Great Depression in America.

From the time of the stock market crash until 1932, stock prices continued to fall. Historians and economists estimate stock prices declined by 89 percent. As a result, thousands of investors went bankrupt, and many banks that held stocks in their portfolios were forced into insolvency. Runs on banks further compounded the problem. Before the depression of 1929, 25,000 banks operated in the United States. As of 1933, there were only 11,000 banks operating.

With so many banks in default and so many people in the United States fearful of the economic downturn, overall spending was reduced. Less spending meant lessened demand for consumer goods. These factors combined to negatively impact manufacturing production levels, thus compounding the downward economic spiral.

The Impact on the World Economy

The Great Depression is one of the most significant events you will study about USA history. However, the years of the Great Depression negatively impacted other countries of the world. Following World War I, the United States served as a major creditor on the world stage, especially among European countries. When the American economy slid into turmoil, a worldwide depression ensued.

Changes on the Horizon

In 1932, Democrat Franklin D. Roosevelt was elected president and inherited a United States depression and its ramifications. Roosevelt introduced significant changes including modifications to the country’s economic structure, increasing government regulations among financial institutions and waging immense public-works projects to spur recovery. Despite these efforts, massive unemployment persisted and the American economy continued to struggle.

When World War II started in 1939, statistics about the Great Depression say that approximately 15 percent of the American work force remained unemployed. After the war started, American factories began to receive considerable orders for arms and munitions from European countries. With this increased manufacturing and subsequent need for more workers paired with the United States’ own entry into the war in 1941 contributed to bringing the country out of the Great Depression.